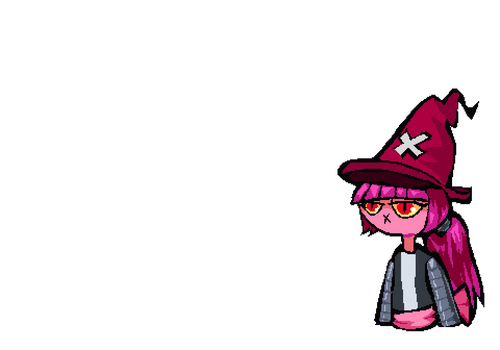 Aaaand here is Suna's littersister Jacy. She's been on the look for a few spell materials in the abandoned factory. But unfortunately she is not quite as lucky today. She's been rummaging through the boxes for hours but just found scraps... And a corpse of an angel.

Story aside, a few more gameplay enhancements are being on the works, such as:

On a different note, here are a few extra enemies that were done, complete with descriptions!

Virsebuns are curious creatures, that appear to be either two beings fused with each other, taking turns on being the "head" and "legs". Some say they were a failed experiment of some of the dolorian scientists on synthetizing new lifeforms for weapon and war purposes. These plans were discarded, though, and the species now lives within the abandoned building. Battle-wise, Virsebuns can counter either physical attacks or magical attacks depending on which is the head.

A relative of the Braddlegs, repurposed for battle. Unlike its cousin, Braddombas explode on the poor individual that dares to step on their way and stick for too long. They also explode upon contact with chemical magic, so careful. Don't worry, they'll be fine afterwards... the Braddomba, not the poor individual.

And then there's this hairy guy that ends up divided when you cut him in half, what the heck.